[From the questions: What else is there to see and do for the LEGO Fan in Billund other than LEGOLAND? Why should I visit Billund?]

Billund is a small town in the Jutland region of Denmark. It’s where LEGO was first developed and created and is some what of a Mecca for hard-core LEGO Fans. Many LEGO fans are drawn to the town because of the LEGOLAND theme park but there are many more LEGO themed things to see and do around the town.

One of the primary reasons for visiting Billund is to go to the LEGOLAND theme park. The park is primarily aimed at children but there’s still lots of fun things to see and do for adults in the park.

Apart from the fun of being on a ride, the main reason to go on the rides is see the LEGO sculptures that may not otherwise be visible. This is particularly true of the Polar X-plorer, the Vikings River Splash, the Pirate Boats, the LEGO Canoe rides. The Mini Boats and LEGO Safari also provide close ups of the LEGO models though these are mostly visible from outside the rides.  There are quite a variety of rides from the sedate monorail or LEGOTOP to the high speed Polar X-plorer and X-treme Racers.

LEGO is not cheap in Denmark. For the most part it’s not good value for money to purchase large sets at LEGOLAND but that doesn’t mean there aren’t other things you could purchase. Apart from the two shops near the entrance, there are smaller, thematic shops spread around the park and these are often worth looking at as they sometimes have unique souvenirs that cannot be purchased elsewhere in LEGOLAND. It might be an engraved lunch box, a mug with your name on it or a piece of themed LEGO wear – every small store has something special. There is also a discount store located between the Big Shop and the LEGOLAND hotel entrance. Don’t expect too much of a bargain, however, as it’s mostly clothing and novelty items.

Every LEGOLAND has its own Miniland and they are all quite different. Sure, there will be some buildings that you will see in more than one park but every Miniland is a reflection of its location has something unique that can only be seen at that park. Highlights of LEGOLAND Billund includes the working lock in the Switzerland section, the Nyhavn section of Copenhagen and the buildings styled on the original Miniland buildings. A fantastic overview of Miniland can be seen from the LEGOTOP ride.

Miniland has thousands of tiny lights inside the buildings, the trains and streetlights. They are lit up at night and it adds a whole new dimension to the display. Worth seeing it you are there on a late opening night or staying at the LEGOLAND hotel.

Entry to the park is free from around thirty minutes before closing. The rides will probably be closed by then but you’ll be able to visit the stores and look around Miniland.

There is a lovely sculpture dedicated to LEGO and play located on the left hand side of the park entrance. 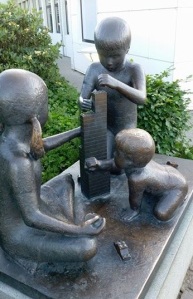 The ultimate place to stay in Billund is the LEGOLAND Hotel. The hotel is decorated throughout with LEGO theming and features a number of themed hotel rooms and play areas. Some of the rooms over look the LEGOLAND park and you can have the fun of watching it come to life (or close down at night).  There is also a small LEGO store located just inside the hotel foyer.

Part of the Billund Holiday Resort, the LEGOLAND Holiday Village provides options for families on a budget. LEGO themed rooms are available in the motel section or there is the option to stay in cabins or in your own tent or caravan. Scattered throughout the park are LEGO sculptures and it is a delight to walk through the grounds to find them all. The small store at the front of the Holiday Village sells LEGO along with other goods you might need for your holiday.

The Ideas House features a small museum of the history of LEGO products from their wooden toy beginning through to the modern era.  The display starts in the house that once belonged to Ole Kirk Christiansen, the original founder of the LEGO company and continues into a concrete building that appears to feature LEGO studs on its outside walls. Though the display is primarily for employees and not generally open to the public, it may be possible to arrange a viewing through your local LEGO User Group (LUG).  The historical displays, which were previously viewable within the windows of the building, have been removed but a more detailed history can now be seen as part of the LEGO House experience.

Located across the road from The Ideas House is the LEGO House. This architectural marvel features interactive zones, a museum, three eating establishments and a LEGO store. Even with a full day it’s almost impossible to see and do every activity in the time available. The website has details of parking, opening times and entry costs.

LEGO Store at the LEGO House

With the opening of the LEGO House in Billund there is now an official LEGO Brand retail store in the home of LEGO. Even though it is located within the LEGO House complex, there is no entry fee to visit the store and it carries a large range of LEGO products and souvenirs for the LEGO House.

The store is currently stocking the LEGO Tree of Creativity set which is exclusive to the LEGO store at the LEGO House. This set has limited availability and is restricted to two sets per person.

Lalandia is an experience in itself with its water park, restaurants, bowling alley, ice skating rink, stores and other assorted activities. Within the retail area can be found the Monky Tonky Factory which sells a wide range of LEGO and sometimes features discounts on discontinued sets. There is also a LEGO sculpture of the store mascot. There is no fee to enter Lalandia and access the store.

On occasion, LEGO sets and LEGO branded/licensed items have been found in the supermarkets in Billund. Probably only worth checking if you have some spare time.

Other places to buy LEGO

If you haven’t quite had your LEGO buying fix, you can also purchase LEGO products from the small stores at the LEGOLAND Hotel (inside the foyer) and the LEGOLAND Village (at the kiosk). 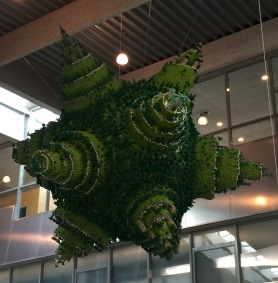 Installed in 2003, the green LEGO sculpture hanging from the ceiling at the Billund Airport goes by the name of “I was the one who gave permission to a slight degree of planting but after the holidays everything seems to have turned green” and was donated to the airport by Kjeld Kirk Kristiansen. It took just over a year to build and contains over 780 kilograms of LEGO.

Within the secure departures area of the Billund Airport can be found a small LEGO store and this is your final opportunity to purchase LEGO products before leaving the home of LEGO.